When Amadora wins a trip to a Mexican resort through her work, she takes the opportunity to live out a one-time fantasy and contacts 1NS. Undercover DEA agents Jason and Angus have been playing it fast and loose with their relationship. Jason’s first wife was killed because of his job and he refuses to weigh his heart down with any more guilt. Angus hasn’t told Jason how much he cares for fear of being pushed away. Meeting Amadora forces them both to reevaluate their lifestyle and consider more than one night together. When her life is threatened, can the three of them accept the risk to their hearts and take a chance on the love they all crave? 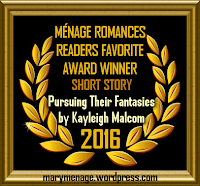 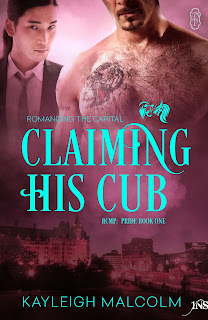 Dary, an officer with the Paranormal/Research/Intelligence/Discipline and Education (PRIDE) department of the RCMP, has little time to pursue his personal interests outside of his job. As a dominant bear shapeshifter in his prime, and a taste for slim, trim boy-toys, his preference has brought him to a crossroad—his desire to find a partner to share his life with is overcast by immature males who don’t share his interests. When he learns about the 1Night Stand service and Madame Eve’s incredible track record for successful matches, he utilizes a rare weekend away from his job to indulge in some much-needed fantasy.
Rhudaii is a unique man in every imaginable way. With an unusually youthful appearance and a little known inherent bombshell of his own, he longs for a deeper connection with a man than just instant gratification. Being an avid romance junkie, Rhoo plans a getaway to a book convention in Ottawa, except surrounded by hundreds of women isn’t what he’s looking for. Instead, he arranges a date through the 1Night Stand service.When the men meet sparks fly and the sexual tension soars. Each of them has a secret that could make or break any potential long-term relationship. But, what if they have more in common than they thought?

An exciting weekend in Sin City with her friends is just what Audrey needs. Living a mundane, repetitive life in a data entry job and having major body insecurities have held her back from pursuing her deepest fantasies. A trip to Vegas with her best friends might be her chance for a single night of memories to last her for the rest of her life. Max and Geoff are lovers well known in high-rolling poker games. Spontaneity and exhibitionism brought them together, but now they want a woman to share their lives with. Hopefully, Madame Eve can find them a woman open to their fetishes who isn’t more interested in their money than them. Audrey is the physical embodiment of everything they desire in a woman. Lush, gorgeous and intelligent. One night isn’t going to be enough with her, but can they convince her to stay? It doesn’t take long for Audrey to realize she’s way over her head with the gorgeous gamblers. They actually think she’s sexy and desirable. Not only that, they want to share their lives with her! Can she set aside her insecurities and spend her life with them?