Every month I get together with my author friends and we write a short story or scene based on the same picture. The only rule - it has to be at least 250 words. But even that rule can get broken. ;)

It's November so we're starting to loose colour around us as the leaves fall from the trees and everything starts to hibernate in preparation for winter. I guess that's why this picture appealed to me so much.

I'm working on a special project for this spring and it was this picture that gave me a perfect"A-Ha!" moment. As it's NaNoWriMo time I need as many inspirational moments as I can get. I'm not sure if this scene will make it into the final story but I hope so. 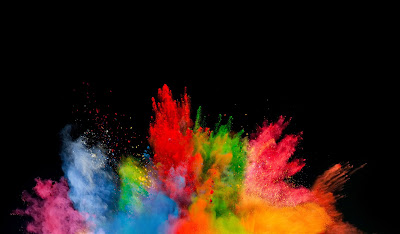 "Don't get me wrong, J. I'm not here to do a trash piece on you or your restaurant, but you have to admit that the sexual harassment suit against you and your partner aren't to be taken lightly."

J took a deep breath before answering, every time those charges were mentioned he felt his blood pressure spike. North Reddington was a small enough community that nasty rumours about the place he and K had put their heart and soul into could ruin them. The bitch who’d laid the charges had been their previous front of house manager and ex-lover, something he and K swore they’d never do again.

K patted him on the shoulder, before answering the reporter’s question. "I appreciate your wanting to feature our restaurant in your article and I promise you that we are completely professional here. The charges are from a disgruntled ex-employee and we're confident that they will be dropped quickly."

He opened the door and a cloud of colourful smoke billowed out at them.  Something smacked against his temple and chin, sending out more clouds of dust that made his eyes water.

The reporter was far enough away to be spared but he and K were covered in what tasted like chalk. Six balls of colourful cheese cloth gently swung from the door way and a heartbeat later one of their employees burst into the back room.

“Oh shit.” She stopped in the open doorway, biting her lower lip. Dammit his cock jerked in his pants, one of these days he wanted to kiss the sting  away from that lip after she’d been biting it. It was a bad habit of hers he’d noticed over the last six months she’d worked there. H looked up at the evidence of her prank and then back to him and K, her lips twitched with what he suspected was her fighting a smile.

K looked furious, his hair covered it electric purple dust, yellow dusted his ears and there was a blue blotch on one of his cheekbones. J imagined he probably looked as ridiculous.

She was the one woman who could make him and K break their vow of knowing their employees intimately. There was no doubt in his head she was behind the prank and J was acutely aware of the camera man snapping pictures behind them.

“What’s going on here? Is this some sort of April Fools prank? Not exactly proof of the professional attitude you mentioned. ” The reporter looked them all up and down and then looked past them to the waitress just inside the door.

“We were celebrating Holi.” H gave the reporter a bright smile and acted as if they’d planned all this. “J and K will be taking part in the Colour Me Rad marathon next month. All money raised will be donated to the renovations at the children’s hospital.”

As excuses went it was a pretty good one, except that he wasn’t in any shape to run a marathon and K was too much of a workaholic to take the time off.

“H’s done the majority of planning and encouraging J and my training. She’ll be joining in on the fun.”

Her smiled faltered for a moment and J thought she was about to launch a string of obscenities in K’s direction. “Oh yeah, can’t wait for it.”

The two of them bickered constantly, but J knew of K’s obsession with her. They’d both spoken in length about their desire to share the smart mouthed waitress. That was until that damn lawsuit had been smacked against them. Now, they were committed to running a marathon with the little minx.

J would much prefer a marathon between the sheets.