Welcome to the first, of what I hope are many, “Write This Picture” blogs. The premise is simple…Show 20 authors the same picture and you’ll get 20 different stories. J

There is only 1 Rule: A picture is worth a thousand words but we only get 250 to let our muses run wild!

Tonight, I’m creating under a cloud of hair dye fumes. (Nutrisse Cream #42 if you’re curious) I’m not sure if it will affect the final outcome of my writing but as long as no one lights a match I should be fine.

There are times that I write scenes to help me get to know a character in a book I’m working on. This is a peek at one of my characters in the book I’m working on for the Black Hills Wolves series. My main hero has screwed up and has no idea how to fix it. I’m not sure if this will make it into the final book but it helped me work out some details. J

This picture makes me think of a place where you could go to think and mentally sort out a difficult puzzle. (Like if you make a really bad first impression and now you have no idea how to correct it.) 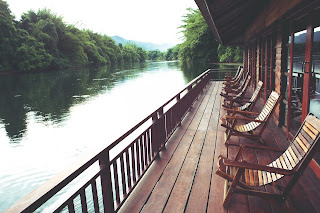 Stone stomped along the river’s edge as rain spit down from the dark clouds overhead, adding to his already bad mood.  He realized now that he’d come on too fast and too strong and that had scared the hell out of Josh. Courting and dating were useless gestures in their world. When you met the other half of your soul, you didn’t knee him in the balls and take off running for the hills. But apparently Josh hadn’t gotten that memo. Now he had to try to figure out a way to convince his mate that he wasn’t a dominate monster.

A soft mewing noise cut through his thoughts and he looked around wondering how the hell a kitten made it into a forest all alone. Following the sound, he discovered the corner of a tattered garbage bag sticking out from under a fallen log. It was obvious that it had been torn into by wild creatures searching for a meal. His nose picked up the scent of several creatures and the remnants of their prey but it appeared they’d missed one.

An impossibly small kitten was caught up in layer of plastic. Dirty and covered in bugs, it lay deathly still in Stone’s palm. His first thought was to put it out of its misery before it too became a wild animal’s snack. Unless, I can save him and somehow convince Josh I’m not a monster. 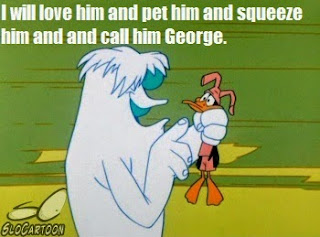 Now, as I got to the end of that I started envisioning Lennie from Of Mice and Men...which makes me sad so my brain quickly shifted to the Bugs Bunny rendition. LOL

Stone is certainly more bad ass than the big white snow monster but it might not hurt if Josh viewed him as a safe harmless cuddle monster.

I also realized then that is was past time to rinse the fumes out of my hair.

Be sure to check out how the other phenomenally talented authors participating this month have translated the same picture!! I was lucky enough to meet both these authors at RTC this year and I can't wait to see them again in 2016. You'll LOVE them!

Comments are always welcome below! Say Hi let me know you're here :) If your an author and you want to join in next month. Find me on FB and I'll add you to our group.
(Here I'll make it easy. Kayleigh Malcolm)